Here is the first of hopefully quite a few personal projects I have planned for the summer. It all started with a watercolor study I did of a sculpture depicting Michael the archangel defeating Satan. That spawned another piece I did for my watercolor final that was in my curvilinear style. (I plan to recreate it digitally and upload it later). But I had so much fun with the concept and the classic characters that I decided to be a little more ambitious and really do my best to depict the epic battle scene that comes to mind when I read through Revelation 12: 7-9. 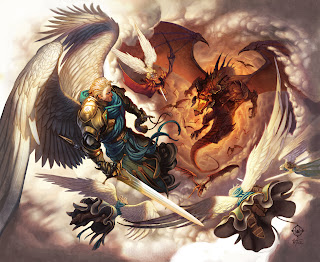 And just for kicks and giggles here is an animated step by step of how I arrived at the final above.

And finally a special thanks goes to Justin Gerard for making awesome work that makes me want to make awesome work of my own, and also for taking the time out of his busy schedule to give me critiques.